The Ken Onion Rain Series by Chef Works was honored with one of the most prestigious
awards for kitchen knives at Blade Magazine’s annual Blade Show in Atlanta in June. Believed by many in the industry to be the world’s most influential knife awards in the world, Blade’s “Knife of the Year” award honors the best in design, functionality, and performance and covers everything from tactical knives to sporting and lifestyle blades to kitchen cutlery.

Chef Works’ newest line, due on the market at the end of the month, received the Kitchen Knife of the Year award at the Blade Banquet which took place during the show. While German and Japanese knife lines have dominated the cutlery market for over 100 years, Chef Works’ winning line is 100% American-made, giving consumers an option that boasts award-winning precision while purchasing “made in the USA” products.

The Ken Onion Rain Series by Chef Works utilizes the newest technology to create the most precision kitchen blades possible. These knives are created using American-made high-carbon stainless steel that has been laser-cut to a tolerance of 1/10,000th of an inch. They are then treated with a proprietary process that creates the stunning rain pattern seen on the blade. The knives are not only beautiful to look at, but functional as well; the highs and lows of the rain pattern reduce the surface tension that keeps food from sticking to the blade. The handles on the Rain Series are made of G10, a fiberglass-infused laminated resin material. G10 is heat- and moisture-resistant, making it one of the most durable materials possible for daily use.

About Ken Onion
Ken Onion is the youngest inductee in the knife makers’ hall of fame. This is the knife industry’s highest honor. Ken has teamed up with Chef Works to create the world’s highest quality, most innovative kitchen knives, and make them in America. The driving force in knife design over the past 2 decades, Ken has once again redefined the art of the kitchen knife. Through a combination of advanced production technologies and an exhaustive study of ergonomics, style, shapes and materials, Ken has created the Rain Series of kitchen knives that are not only visually stunning, but outperform the world’s leading brands.

Click here to view the Rain Series of knives. 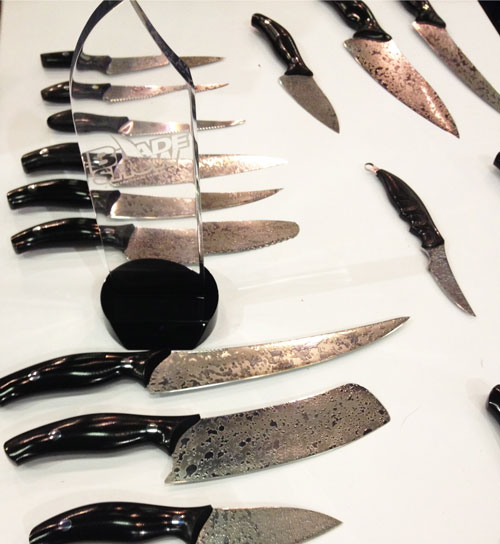